A small crew turn out for yesterdays working bee with the aim being to continue work on tutsan at a site in the Tarra Valley that had been sprayed by contractors in March. Having been several months since we had viewed the site we ventured in with nervous anticipation. The possible scenario being anything from complete success with the spray having knocking each tutsan plant stone dead or the other alternative where the spraying was ineffective and the tutsan was thicker than ever.

After the climb up to the site the initial news was good with the remains of dark brown and dead tutsan clearly visible. We set to work in a methodical fashion and soon found plenty of living plants to deal with, mostly on the outer edges of the infestation, some that had been sprayed and not completely killed and others that had been missed. We found few (if any) newly germinated plants from seed, but there is bound to be a massive seed bank present which you can guarantee will get sprouting at some stage.

As we walked further into the site, cutting and pasting living tutsan as we went, we found further evidence that tutsan that had been growing out in the open was completely dead and areas that had been thick with tutsan had now opened up. Pioneer species such as white elderberry (Sambucus gaudichaudiana) were popping up in the bare ground now exposed. The plants that were not out in the open are harder and intermingled with native species are harder to deal with and a number of large unsprayed patches further up the slope were discovered. They were too big for our small crew to tackle in one session and where mapped for us to tackle another day. One open slope area that had been sprayed had a fair proportion of plants still alive and reshooting, so a far bit of time was required to retreat them with poison. Although it was easy to lose count we treated at least 300 living tutsan plants in around 3 hours. We also worked on the odd bit of blackberry as well as approximately 20 sycamore maple which was the original weed we targeted on this site, we were originally pulling out maple seedlings by the hundreds. Overall the spraying made possible by a Communities For Nature Grant has been very successful but as anticipated we will need to do follow up work at this site over a number of years to promote the regeneration of native species and prevent the Tutsan coming back. 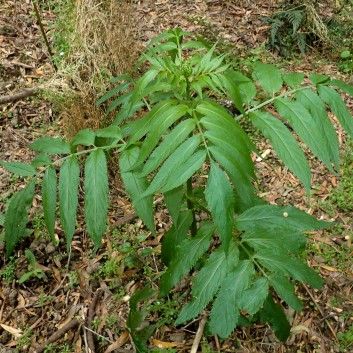 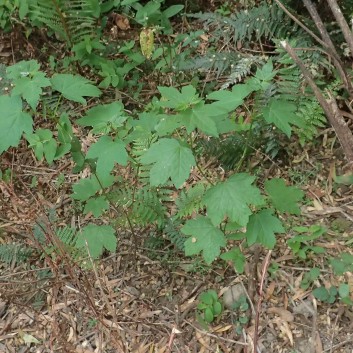 When cyclists from the Great Victorian Bike Ride “ascend” on Tarra Bulga next week they will notice along with the many native plants in flower some attractive looking flowering plants that are in fact not so desirable. One of the most obvious they will see is Creeping Buttercup – (Ranunculus repens). Although there are native Buttercup species this one comes from the Northern hemisphere. As can be seen by the sea of yellow along the roadsides at this time of the year, it has been well established for a long time and has also penetrate to some moist areas deeper in the park resulting in the displacement of native species.

Another weed that is threatening to take over and become more of a pest is Myosotis sylvatica or  Wood forget-me-not. There are also native relatives of this plant in existence, but this species is native to Europe and has been introduced to Tarra Bulga from garden escapes. It is popping up all over the roadsides and is threatening to penetrate deeper into the park. Park staff and volunteers are vigilant in trying to remove seedlings whenever they are encountered but the task seems to be getting more difficult.