Since our remote camera project began around two years ago, we had only once photographed a Koala. These figures have now been boosted by 800% with a camera in the north east of Tarra Bulga National Park capturing a Koala eight times all on separate days over a period of about 7 weeks.  Most sightings were in the early morning, but a few were in the evening.  Another case luck with the camera being at the right place at the right time to film the comings and goings of the locals.

Heavy snowfalls are a relatively rare event at Tarra Bulga National Park.  A large dump in August 2005 caused a lot of damage to the park’s vegetation due to the weight of the snow. Today’s snow is the biggest dump since this event and hopefully the damage will not be too severe but it certainly will have an impact.

This morning there were plenty of tree branches cracking under the weight of the snow and in more open areas shrubs were taking a battering.  Tree Ferns are an ideal shape to catch snow on  their fronds, but thankfully they seem very good at recovering from damage. The area where our working bee was a week and a half ago was covered in snow, which is not an ideal start for our newly planted Mountain Ash seedlings.

It was interesting to see the Fauna’s reaction to the sudden icy change to their landscape with a confused Kangaroo hopping about (outside the park boundary) and Lyrebirds and other species buzzing around and looking a bit agitated. The snow would have affected mainly the higher elevations in the park, with sites along the Grand Ridge Rd catching the heaviest falls.

We had our Annual Dinner for the Friends of Tarra Bulga last night and these videos were shown as a summary of the results from our remote cameras for the year. They are now up on YouTube and can be seen here for anyone who was unable to attend and anybody else that is interested.

This second video is from one camera from the Tarra Valley section of the park that was in place for almost a whole year. It has some of the animals labelled to help you know what you are looking at.

There are seven different species of the fern genus Blechnum (Water Ferns)  in Tarra Bulga National Park and with a bit of background knowledge it is relatively easy to tell them apart. This post will focus on the identification of Blechnum nudum (Fishbone Water-fern) and Blechnum cartiliagineum (Gristle Fern), which unlike the other 5 species both have leaflets (pinna) being directly attached to the regular fronds by a broad base. The easiest way to tell them apart is by their fertile fronds.

Blechnum nudum (Fishbone Water-fern) is usually found in clumps in wet forest and gullies, it is reasonably common around Tarra Bulga. 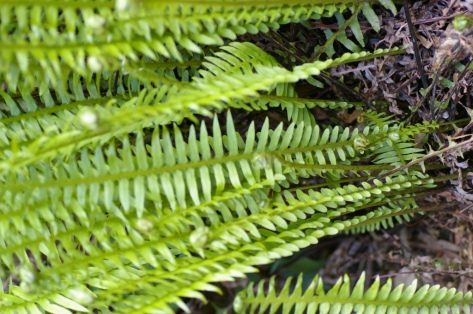 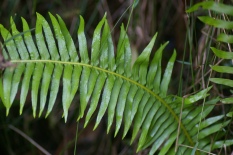 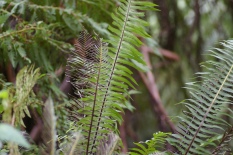 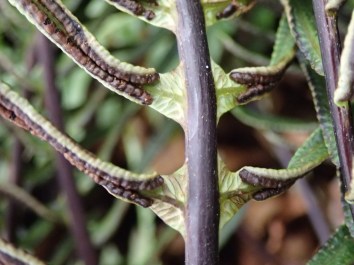 Blechnum nudum – Fishbone water-fern, showing fertile fronds which are different to the barren ones (which don’t carry spores) 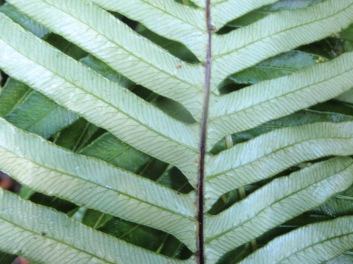 Blechnum nudum – Fishbone Water-fern, showing the underside of the leaflets (pinnae) which are a paler green and are attached to the frond by a broad base. The shaft of the frond (rachis) is often a shiny black colour.

Blechnum cartiliagineum (Gristle Fern) is less common in Tarra Bulga and is more commonly found in gullies or sheltered spots at lower elevations downstream from the park. 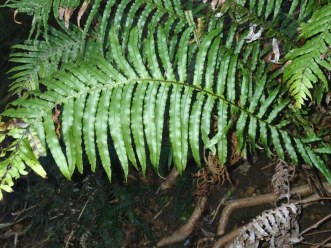 Blechnum cartilagineum – Gristle-fern, The paired pinnae (leaflets) towards the base are separate and point downwards. 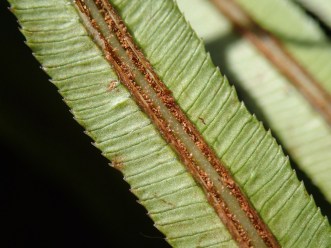 Blechnum cartilagineum – Gristle-fern, Underside of a fertile frond showing bands of sori either side of the mid-vein. 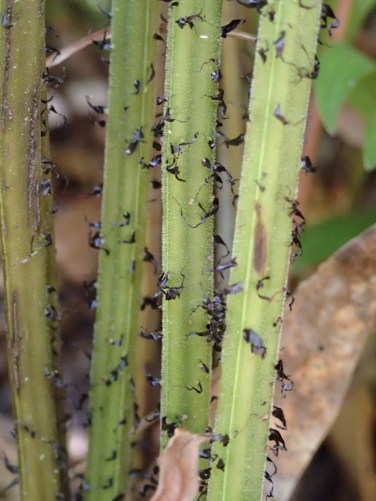 Blechnum cartilagineum – Gristle-fern, showing the lower stem (Stipe) which is grooved and has black scales. 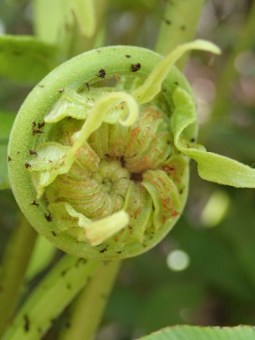 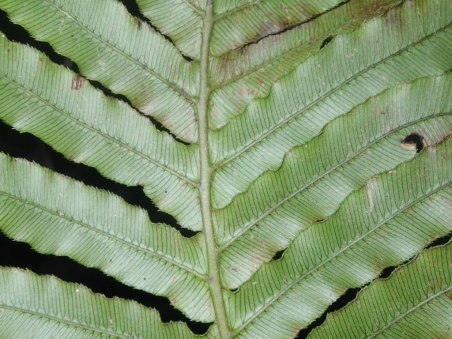 Blechnum cartilagineum – Gristle-fern, also has leaflets attached to the rachis by their broad base.

Despite having weed as part of their common name and belonging to the same genus as the much maligned Ragwort (Senecio jacobaea), there are several species of Senecio in Tarra Bulga National Park that are locally indigenous and very much desirable. They are most commonly found in open and disturbed areas, usually where there is a break in the canopy or on the side of  roads and tracks. Their ability to quickly colonise an area like this means they can compete against real weeds that may potentially invade these sites.

Senecio linearfolius (Fireweed Groundsel) grows to about 1.5 metres high and usually has smooth narrow lance shaped leaves with regularly spaced teeth. When in flower it can be identified by the 5 yellow ray florets (like petals) on each flower head. The flowers heads are clearly different from the other species that exist in the park (described below). 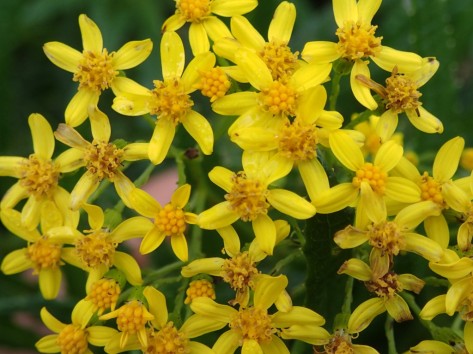 Can usually be identified when if flower by the 5 yellow ray florets (that look like petals) on the individual flower heads. 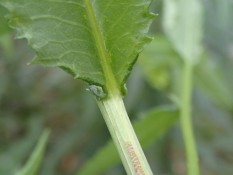 The base of the leaves taper to a point at the base. 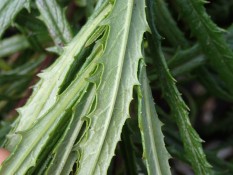 The underside of the leaf is smooth. 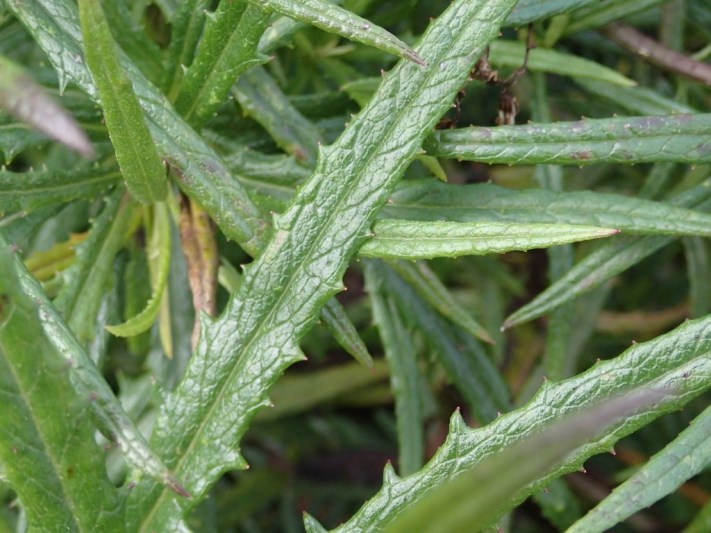 Senecio pinnatifolius (Variable Groundsel) is an amazingly variable species with huge differences in the size and form of the plant possible. What is consistent however is the attractive flower heads which are wider than the other species (up to 15 mm across) and have up to 14 yellow (petal like) ray florets, The unopened flower buds are bell shaped. The foliage is so variable that it is not useful for identification apart from the fact that the leaves are sessile (which means they are connected to the stems without a stalk) and it is usually hairless. 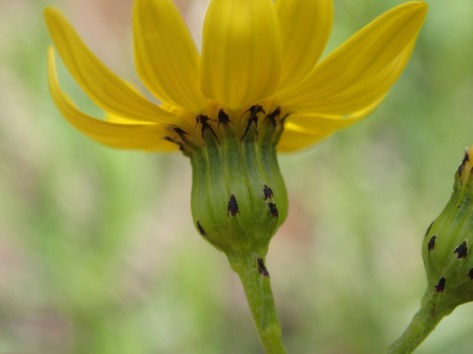 The unopened flower buds are bell shaped and look like this one the flower has opened up. 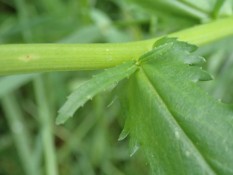 Attachment of the leaf to the stem. 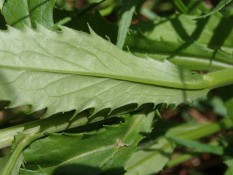 The leaf shape and size is very variable, it is usually hairless and always attached directly to the stem without a stalk (petiole). 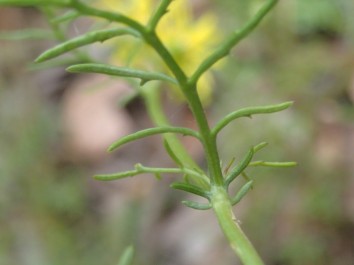 An example of the amazing difference in the foliage, this one was photographed only metres away from the one photographed above. 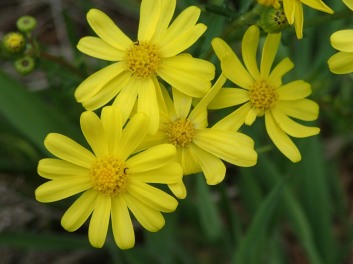 With is attractive flower heads, not it has up to 14 yellow ray florets (like petals) while Senecio linearfolius usually only has 5.

Senecio minimus (Shrubby Fireweed) has more consistent leaf characteristics so you can usually easily identify it without seeing its flowers. The leaves are lance shaped and have evenly spaces small raspy teeth on the margins. Where the leaf base is attached to the stem there are two lobes (auricles). The stems themselves have vertical ridges and are usually quite purple. The flowers heads are clearly different from the other two species. There are large clusters of them at the end of flower stalks but they do not have any petal like ray florets. 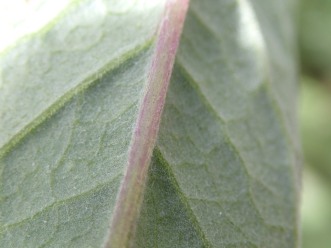 Underside of the leaf 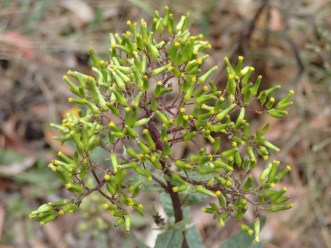 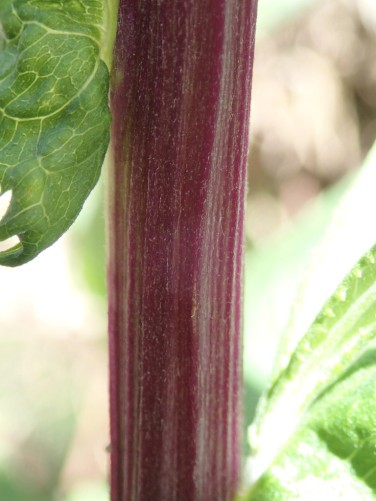 The stem is purplish and has prominent ridgelines. 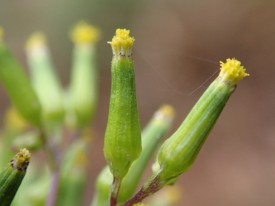 Close up of the flower heads. 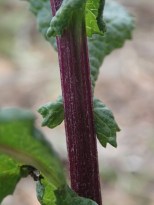 The base of the leaf where it attaches to the stem with the pair of toothed lobes called auricles. 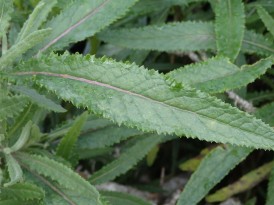 Has consistently the same shaped leaves with small raspy teeth all the way along the margins.

Senecio jacobaea (Ragwort) is a noxious weed, sometimes found in disturbed sites in Tarra Bulga, but it is far more common in in cleared farming areas nearby. It has similar looking but smaller flowers when compared with Senecio pinnatifolius, but it has distinctive deeply lobed leaves which make it clearly identifiable. 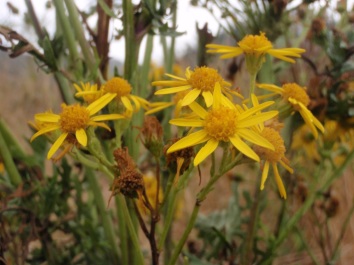 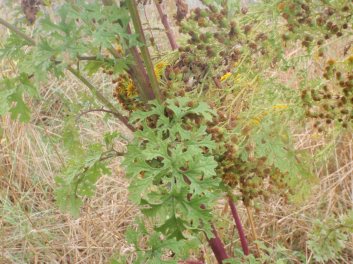 Made the trek out to the re-vegetation site for the first time since the planting was done which was a bit over two months ago.

From looking around the site there was both good and bad news. First the good, there was virtually no sign of any Wallabies managing to get to chew any of the new seedlings, despite the fact I heard one hopping away when I reached the site. There was good fresh new growth on all the seedlings that I found, hopefully when they become more conspicuous as they get taller the wallabies will still find them too difficult to reach. The bad news is that after seeing very, few new seedlings of Sycamore Maple